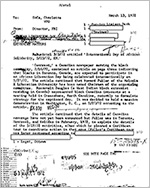 The Liberation Movement in Africa and African America

Militant Black nationalism and pan-Africanism influenced and paralleled African America’s interest in Africa. Africa's entrance into the international arena and American Cold War politics helped fuel the Civil Rights and the Black Power movements of the 1960s and 1970s.

The FBI labeled both of the ALSC and A-APRP as subversive in the early 1970s and began an extensive surveillance campaign. The U.S. State Department provided additional surveillance assistance in re to Americans traveling to and from Africa.