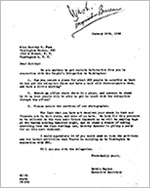 The National Negro Congress was established in 1936 to "secure the right of the Negro people to be free from Jim Crowism, segregation, discrimination, lynching, and mob violence" and "to promote the spirit of unity and cooperation between Negro and white people." It was conceived as a national coalition of church, labor, and civil rights organizations that would coordinate protest action in the face of deteriorating economic conditions for blacks. The National Negro Congress (NNC) was the culmination of the Communist Party's Depression-era effort to unite black and white workers and intellectuals in the fight for racial justice, and marked the apex of Communist Party prestige in African American communities. This collection comprises of the voluminous working files of John P. Davis and successive executive secretaries of the National Negro Congress. Beginning with papers from 1933 that predate the formation of the National Negro Congress, the wide-ranging collection documents Davis's involvement in the Negro Industrial League and includes the "Report Files" of Davis's interest and work on the "Negro problem."