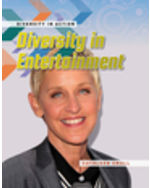 Television, movies, theater, and music are just a few of the entertainment industry's most popular niches, and its stars are often well-known around the world. In this entertaining and informative book, readers will learn more about celebrities who celebrate their diversity throughout history. Inspiring case studies include actor Micah Fowler, who has cerebral palsy; Kenyan-Mexican Academy Award−winner Lupita Nyong'o; pop superstar Justin Bieber, who grew up in low-income housing; and Ellen DeGeneres, the comedian who played a lesbian on television, and then publicly came out to the world.