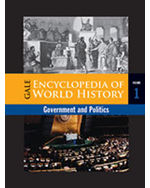 Gale Encyclopedia of World History: Governments provides a broad overview of national governments throughout history, explaining their structures and histories, key players and events, and how governments effect---and are affected by---social change.

In two volumes, the set is organized chronologically, by era, into chapters. Chapters include:

Each chapter includes an introductory essay on the types of governments emerging at that time followed by government entries grouped under consistent subheads:

Gale Encyclopedia of World History: Governments consists of approximately 400 entries, including subject entries and biographies that average about 1,000 words; 350 images, including maps; a chronology; a glossary; sources for further study; and a general index.

"...a two-volume encyclopedia intended to provide readers with a sense of how historical forces and influences mold governments of the past and present." --Booknews.com, August 2008

"I would include this in my library because of the organization, I think, is easy for the reader and the text itself is very informative." --Library Media Connection, November 2008

"This would be a good tool for secondary or college students taking comparative government courses. Recommended." --CHOICE, October 2008

"the work is extremely informative and brings new perspectives with an unusual array of categories and rubrics." --ARBA, March 2009

"the work is extremely informative and brings new perspectives with an unusual array of categories and rubrics." --ARBA, June 2008 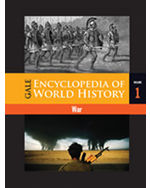