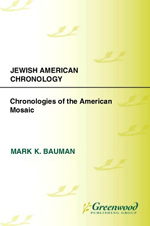 Covering more than four centuries from the Colonial Era forward, JEWISH AMERICAN CHRONOLOGY offers an introduction to the history of American Jews and Judaism, using individual examples, personality profiles, and illustrations to bring fundamental patterns and major themes to life. Arranged chronologically, the entries illustrate how a variety of different Jewish groups and individuals have adapted to America, both changing in accordance with time and place and retaining tradition and culture, even as they became thoroughly American. Readers will learn how Jews have created community and institutions, confronted anti-Semitism, and interacted among themselves and with other groups. They will read about immigration, migration, and socioeconomic mobility. And they will discover how Jews have filled critical economic niches, contributed disproportionately in a variety of endeavors, and changed over time and in reaction to circumstances. In this wide-ranging work, Jewish Americans are depicted in a balanced and accurate manner, describing Nobel Prize winners and standout economic success stories as well as those who achieved fame and notoriety in other ways.