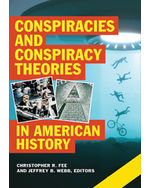 Unsupported theories provide simple explanations for catastrophes that are otherwise difficult to understand, from the U.S. Civil War to the Stock Market Crash of 1929 to the terrorist attacks on the World Trade Center in New York. Ideas about shadowy networks that operate behind a cloak of secrecy, including real organizations like the CIA and the Mafia and imagined ones like the Illuminati, additionally provide a way for people to criticize prevailing political and economic arrangements, while for society's disadvantaged and forgotten groups, conspiracy theories make their suffering and alienation comprehensible and provide a focal point for their economic or political frustrations. These volumes detail the highly controversial and influential phenomena of conspiracies and conspiracy theories in American society. Through interpretive essays and factual accounts of various people, organizations, and ideas, the reader will gain a much greater appreciation for a set of beliefs about political scheming, covert intelligence gathering, and criminal rings that has held its grip on the minds of millions of American citizens and encouraged them to believe that the conspiracies may run deeper, and with a global reach.