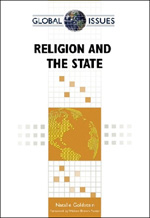 Religion has been a force in the conduct of politics and the formation and functions of most nation-states. In the modern global system, the concept of secularization has been a cause of controversy, and, in some cases, political violence. But at the core of the debate over secularization lie the questions of defining the parameters and degree to which religion should influence the state and politics. Some measure of success may have been achieved in managing the influence and reach of religious institutions and actors in matters of the state and politics, but by its nature religion manifests itself individually, personally, and communally. Religion and the State explores how different societies have defined the relationship between RELIGION AND STATE over time, ranging from separation of church and state to theocracy. After an overview of the history of that relationship organized by religion, this new book explores the influence of Christianity on the founding of the United States and why religion still plays a major role in the country's politics and policy. Attention is then given to Iran, Saudi Arabia, Tibet, India, and Western Europe, regions and countries with drastically different levels of religious toleration and where the religions of Islam, Buddhism, Hinduism, and Christianity have varying degrees of political weight.