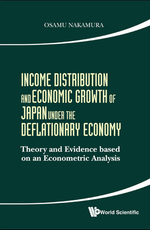 Income Distribution And Economic Growth Of Japan Under The Deflationary Economy: Theory And Evidence Based On An Econometric Analysis, 1st Edition

The Japanese economy has experienced a structural deflationary gap since the mid-1970s. Although the gap was decreasing in the bubble period, the deflationary economy has become more serious since the bursting of the bubble. Accordingly, this book attempts to examine the causes of the Japanese deflationary economy, characterized as a structural deflation and discusses how to alleviate the prolonged slowdown in order to restore Japan to a trajectory of high economic growth, with a special focus on the function of income distribution. In addition, not only income distribution flows but also accumulation of assets and debts in the household sector are taken into account for improving the prolonged economic stagnation of Japan by employing an econometric analysis with modeling and forecasting techniques. Furthermore, this book makes a long-term forecast of the Japanese economy, up to the fiscal year 2030, with policy scenario simulations in order to capture the long-term growth path of the Japanese economy and to analyze the effects of alternative policies on the economy.