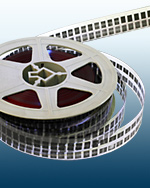 Cultural Policies of the Third Reich in Occupied Europe: Files of the Einsatztab Reichstleitern

World War II resulted in the greatest loss and displacement of cultural treasures, books, and archives in history. As the German army occupied more and more of the European continent, Nazi cultural organizations swept up millions of items from museums, libraries, archives, and individuals.

The primary Nazi cultural affairs organization was the Einsatzstab Reichsleiter Rosenberg (ERR). The ERR was a Nazi Party organization established in 1940 under the direction of Alfred Rosenberg. Its activities included the confiscation of designated cultural treasures and private art collections in Nazi-occupied territories. With its headquarters in Berlin, the ERR became the chief Reich agency for the spoliation of artistic and intellectual resources in areas occupied by Nazi Germany.

From November 1940 through mid-1944, the ERR was involved in the seizure of artworks and cultural artifacts from Jews and others deemed by the Nazis to have lost their property rights. The majority of the items confiscated were scheduled for transfer to Germany for safekeeping and ultimate disposition by an official directly responsible to Hitler. The looted works of art were intended for division among private collections for Hitler and Hermann Göring, art collections at German museums, and those suitable for sale at auction. It was reported that between March 1941 and July 1944 the ERR plundered 21,903 art objects, mainly from private Jewish collections.

Most comprehensive resource for study of Nazi ideology and cultural policies in occupied Europe. It was strictly classified during the Soviet period and became available to researchers only in the 1990s, and contains undiscovered gems for researchers of World War II, the Third Reich and art history.