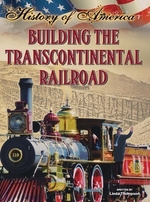 The construction of a transcontinental railroad was one of the United States' greatest technological achievements. Railroad track had to be laid over 2,000 miles of rugged terrain, including mountains of solid granite. The first spikes were driven in 1863, in the midst of the Civil War. The transcontinental railroad was built in six years almost entirely by hand. Workers drove spikes into mountains, filled the holes with black powder, and blasted through the rock inch by inch. This title will allow students to analyze in detail the structure of a specific paragraph in a text, including the role of particular sentences in developing and refining a key concept.