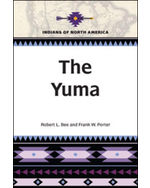 The Yuma, part of the Indians of North America series, presents a fascinating portrayal of the history and culture of these native people. The Yuma—who today prefer to be called the Quechan—have long been known as fighters. For centuries they battled the Papago, Apache, and other tribes for control of the fertile floodplain of the Colorado River along what is now the boundary between California and Arizona. In 1718, the Yuma revolted against Spanish attempts to control the region and killed or captured the intruders. Non-Indians did not venture again into Yuma territory until the 1840s, when prospectors traveled through the tribe's land to get to California. In 1852, the U.S. Army put an end to Yuma military resistance and finally secured the region for non-Indian settlement.