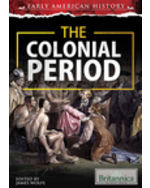 This valuable resource begins with a summary of exploration in the New World. It then follows early colonization efforts, describing the journeys of the first colonists into the unknown and their struggles to make something of their harsh new environment. Readers will learn about the colonies' early societies, governments, and trades. The colonists growing dissatisfaction with England is charted as it swells towards all-out revolution. This volume showcases key figures, important events, and the emergence of the distinctive American spirit in examining the period of history when British colonists would become Americans.