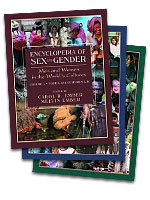 The aim of Encyclopedia of Sex and Gender: Men and Women in the World's Cultures is to give the reader a comparative perspective on issues involving conceptions of gender, differences, roles, relationships between the genders, and sexuality. The encyclopedia is divided into two volumes: Topics and Cultures.

Almost every culture has experienced adaptation and assimilation when immigrating to a new country and culture; usually leaving for what is perceived as a "better life". Not only does this diaspora change the country of adoption, but also the country of origin. The Encyclopedia of Diasporas: Immigrant and Refugee Cultures Around the World consists of two volumes covering three main sections: Diaspora Overviews covers over 20 ethnic groups that have experienced voluntary or forced immigration. These essays discuss the history behind the social, economic, and political reasons for leaving the original countries, and the cultures in the new places; Topics discusses the impact and assimilation that the immigrant cultures experience in their adopted cultures.

Encyclopedia of Medical Anthropology: Health and Illness in the World's Cultures addresses medical practitioners and the ordinary citizen that are becoming more aware that we need to understand cultural variation in medical belief and practice. The more we know how health and disease are managed in different cultures, the more we can recognize what is "culture bound" in our own medical belief and practice. The Encyclopedia of Medical Anthropology is unique because it describes the cultural practices relevant to health in the world's cultures and provides an overview of important topics in medical anthropology. More than 100 experts - anthropologists and other social scientists - have contributed their firsthand experience of medical cultures from around the world.