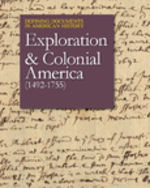 This volume begins with a collection of exploration and colonial documents, including important journals of exploration, reports of New World settlements, early political tracts on self-governing. Also included are narratives on colonial life and slavery and indentured servitude.

Front Cover.
Half Title Page.
Title Page.
Copyright Page.
Contents.
Complete List of Contents.
Publisher's Note.
Introduction.
Contributors.
Other Frontmatter.
Journals on Exploration.
1: Journal of the First Voyage of Columbus.
2: The Journey of Coronado, 1540–1542: Account of the Expedition to Cibola Which Took Place in the Year 1540, in Which All Those Settlements, Their Ceremonies and Customs, Are Described.
3: In Defense of the Indians.
4: Captain Arthur Barlowe's Narrative of the First Voyage to the Coast of America.
5: A Description of the New Netherlands.
6: The Jesuit Relations and Allied Documents.
7: Etienne Véniard de Bourgmont's Exact Description of Louisiana.
8: A Narrative of the Missions of the United Brethren among the Delaware and Mohegan Indians.
9: Journal of the Expedition of the Chevalier de la Vérendrye and One of His Brothers to Reach the Western Sea Addressed to the Marquis de Beauharnois.
10: Supplemental Historical Documents.
Reports on New World Settlement.
11: A Brief and True Report of the New Found Land of Virginia.
12: The General History of Virginia, New England and the Summer Isles.
13: Of Plymouth Plantation.
14: Mourt's Relation: a Journal of the Pilgrims at Plymouth.
15: An Account of Two Voyages to New-England Made During the Years 1638, 1663.
16: A Key into the Language of America.
17: Edward Randolph's Report of King Philip's War in New England.
18: A Relation of the Indian War.
19: Revolt of the Pueblo Indians of New Mexico and Otermín's Attempted Reconquest.
20: New English Canaan.
21: Positive Information from America, Concerning the Country of Pennsylvania by a German who has Migrated Thither, 1684.
22: Supplemental Historical Documents.
Early Political Tracts on Self-Governing.
23: The Constitution of the Iroquois Nations: The Great Binding Law, Gayanashagowa.
24: Articles, Laws, and Orders, Devine, Politic, and Martial for the Colony in Virginia.
25: The Articles of Confederation of the united Colonies of New England.
26: The Fundamental Constitutions of Carolina.
27: Limitation of Government.
28: Massachusetts Body of Liberties.
29: Frame of Government of Pennsylvania.
30: Pilgrim Code of Law.
31: At the Town-House in Boston and Boston Declaration of Grievances.
32: The Shields of the Churches: New England's Governors.
33: Pennsylvania Charter of Privileges.
34: English Liberties and Deference.
35: The History and Present State of Virginia.
36: A New Voyage to Carolina.
37: The History of King Philip's War.
38: Vindication of the Government of New-England Churches.
39: Founding Vision for Georgia.
40: Some Grounds of the War Against the Pequots.
41: Canassatego's Speech at the Treaty of Lancaster, 1744.
42: The History of the Colony and Province of Massachusetts-Bay.
43: Memoir on the French Colonies in North America.
44: Supplemental Historical Documents.