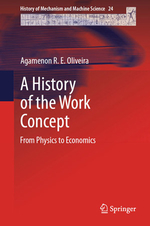 A History of the Work Concept, 1st Edition

This book traces the history of the concept of work from its earliest stages and shows that its further formalization leads to equilibrium principle and to the principle of virtual works, and so pointing the way ahead for future research and applications.The idea that something remains constant in a machine operation is very old and has been expressed by many mathematicians and philosophers such as, for instance, Aristotle. Thus, a concept of energy developed. Another important idea in machine operation is Archimedes' lever principle.In modern times the concept of work is analyzed in the context of applied mechanics mainly in Lazare Carnot mechanics and the mechanics of the new generation of polytechnical engineers like Navier, Coriolis and Poncelet. In this context the word 'work' is finally adopted. These engineers are also responsible for the incorporation of the concept of work into the discipline of economics when they endeavoured to combine the study of the work of machines and men together.

Front Cover.
Half Title Page.
Aims and Scope of the Series.
Title Page.
Copyright Page.
Preface.
Contents.
Work Concept in the Machines Context.
1: Theoretical Framework.
2: The Conceptual Genesis.
3: The Conceptual Basis to Work Studies.
4: The Ideas of Work and Energy in Mechanics.
5: The Rational Mechanics Dilemma.
6: The Instrumental Genesis.
7: Lazare Carnot's General Theory of Machines.
8: The “Fundamental Principles of Equilibrium and Motion” of Lazare Carnot.
9: The Metamorphosis of the Work Concept and Its Incorporation into Economic Thought.
10: Conclusions.
Erratum to: The Conceptual Basis to Work Studies.