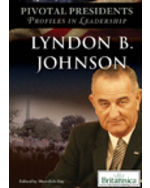 Lyndon B. Johnson, thrust unexpectedly into the presidency after John F. Kennedy's assassination, ushered in a new wave of civil rights and launched a war against poverty. Though his experience as Senate majority leader helped ensure the passage of much of his domestic agenda, his administration was soon hampered by the ongoing war in Vietnam. By 1968, with the country embroiled in race riots as well as antiwar protests, Johnson declined to run for a second full term. This biography explores how a son of Texas pioneers became a bold champion of civil rights and embattled commander in chief.