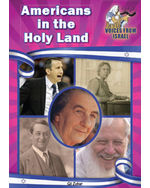 This series gives young readers from other parts of the world insight into various aspects of life in Israel today. Written and crafted by three authors currently living in Jerusalem, this series is the first of its kind to bring such insight to children. This volume tells the story of brave Americans who lived in and influenced the new state of Israel. This book tells about American explorers and archaeologists, colonists, visionaries, politicians, philanthropists, soldiers, spies, scholars and athletes all of whom played (or are still playing) a major role in Israel and Palestine. We'll also meet some of the estimated 350,000 people who hold dual American and Israeli citizenship.