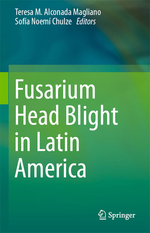 Fusarium head blight (FHB) on small-grain cereals is one of the most devastating diseases. Several species can cause head blight, though Fusarium graminearum is the predominant pathogen in most regions. F. graminearum is one of the most intensively studied fungal plant pathogens. This book presents the current state of knowledge regarding mycological aspects that make wheat-Fusarium interaction, such as hyphal growth, morphogenesis in germinating spores, visualization of enzymatic hydrolysis, production of mycotoxins, inhibition of the hyphal growth by antagonist microorganisms, use of natural substances or by modification of the host resistance, as well as genetic analysis and expression of genes that regulate the infection. Fungal ecology and epidemiology will also be discussed. Just as the analysis of environmental requirements for the establishment of the disease, the use of forecasts of disease risk with meteorological base and integrated management and control. This book includes the study of disease in Latin America, therefore will be of interest to researchers who are working on the issue, as for those who are interested in knowing about the disease.