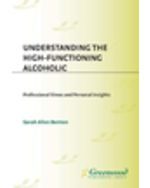 Who is the typical alcoholic among the 12.5 million living in the United States now? Many, if not most of us when asked that question, would envision a skid row bum or someone at least out of work or with little education locked into a low-skill, low-paying job. But that is not accurate, according to the results of a national study released in June, 2007 by the National Institutes of Alcohol Abuse and Alcoholism. The NIAAA determined that alcoholics in the United States really fall into five subtypes, including nearly 20 percent who are highly functional alcoholics, well-educated with good incomes. They include corporate presidents, powerful politicians, police, lawyers, doctors, scientists, and other highly-skilled, highly-educated people who are middle- to high-income and by most accounts successful.

In this unprecedented book, mental health counselor Sarah Benton takes us into the worlds and minds of so-called high-functioning alcoholics to understand how people so intelligent and achievement-oriented get drawn into states in which they secretly cannot control their liquor consumption but still manage to excel in their careers.

The book includes a look at celebrity alcoholics like singer Eric Clapton and actor/comedian Robin Williams, as well as alcoholics in high positions including Chris Albrecht, former Chairman and CEO of HBO. Other high-profile people included in this book are Miss USA 2007 Tara Conner and football legend Joe Namath. With her own story of alcoholism and her recovery woven into the text, Benton takes us into the lives and challenges of these well-educated and successful people, seeking to understand how, when and why they became addicted, as well as the reasons their alcoholism is, for most, so hard to admit, cope with, and recover from.