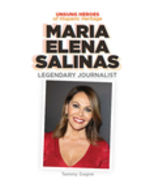 Maria Elena Salinas was born in Los Angeles, California. Her birthplace made her an American citizen. But her heritage allowed her to identify with two countries. One was the United States. The other was Mexico, where she spent the first several years of her childhood. When she returned to the United States as a young girl, she spoke Spanish. In just a few months, she learned English at her new school. As a teen, Maria dreamed of becoming a successful fashion designer. As an adult, she would discover a new calling: journalism. Find out more interesting information about this popular journalist inside this book about one of the first female news anchors in the nation.