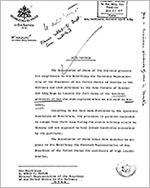 The relationship between Pope Pius XII and the Holocaust has long been controversial. Some scholars argue that he kept silent during the Holocaust, while others maintain that he saved possibly hundreds of thousands of Jewish men, women and children.

According to many scholars, the Vatican was reluctant to openly condemn Hitler and Nazi Germany. Pius XII willingly applied direct diplomatic pressure on Axis satellite states such as Hungary, Romania and Slovakia. Similarly, documented instances show initiatives taken by local Catholics under the covert direction and moral support of Pius XII.

U.S. Relations with the Vatican and the Holocaust, 1940-1950 offers rare primary sources tied to Myron Taylor, appointed as the president's representative to the Vatican. The content includes telegrams, dispatches and letters between Taylor and his staff, the State Department, U.S. government agencies, the Vatican and the Italian government.

This collection consists of the State Department's records of the personal representative of the President to Pope Pius XII, including the Decimal File, Confidential Correspondence File and the Airgrams File.