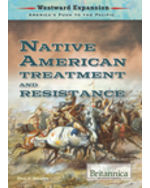 The romantic myth of America's frontier that many people encounter in the media is only part of the story of the nation's expansion in the nineteenth century. This book illustrates the push by European settlers and the federal government ever westward, and its effects on indigenous peoples. Through primary source historical images and the tragic narrative of broken treaties, relocations, and armed conflict, it brings the inspiring resistance and fight for self-determination of Native Americans into the hands of your readers. It also contextualizes these struggles with modern ones, including the American Indian Movement and ongoing tribal anti-pipeline protests.