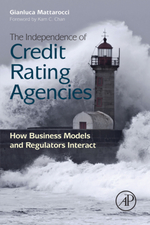 The Independence of Credit Rating Agencies focuses on the institutional and regulatory dynamics of these agencies, asking whether their business models give them enough independence to make viable judgments without risking their own profitability. Few have closely examined the analytical methods of credit rating agencies, even though their decisions can move markets, open or close the doors to capital, and bring down governments. The 2008 financial crisis highlighted their importance and their shortcomings, especially when they misjudged the structured financial products that precipitated the collapse of Bear Stearns and other companies. This book examines the roles played by rating agencies during the financial crisis, illuminating the differences between U.S. and European rating markets, and also considers subjects such as the history of rating agencies and the roles played by smaller agencies to present a well-rounded portrait.