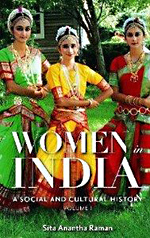 Women in India: A Social and Cultural History, 1st Edition

Are Indian women powerful mother goddesses? Or are they domestic handmaidens trailing behind men in literacy, wages, opportunities and rights? Have they been agents of their own destinies or voiceless victims of patriarchy? Behind these colorful over-simplifications lies the reality of many feminine personas belonging to various classes, ethnicities, religions and castes.

This two-volume set looks at Indian history from ancient to modern times, revealing precisely why ideas of gender rights were not static across eras or regions. Raman's work is a reflection on the various ways in which women in a non-Western culture have developed and expressed their own feminist agenda. Individual chapters highlight the enduring legacies of many important male and female figures, illustrating how each played a key role in modifying the substance of women's lives. Political movements are examined as well, such as the nationalist reform movement of 1947 in which the ideal of Indian womanhood became central to the nation and the push for independence. Also included is a survey of women in contemporary India and the role they played in the resurgence of militant Hindu nationalism. Aside from being an engaging and readable narrative of Indian history, this set integrates women's issues, roles and achievements into the general study of the times, providing a clear presentation of the social, cultural, religious, political, and economic realities that have helped shape the identity of Indian women.