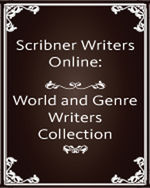 This collection includes Scribner literature titles that focus on different aspects of world and genre literature. World literature titles include African Writers, Latin American Writers, Ancient Writers, and more. For example, African Writers is a 2-volume set that covers 65 African writers from seventeen countries writing in English, French, Portuguese, Arabic, and indigenous languages. Authors span the late 19th century to the present and include such figures as: Najib Mahfuz, Wole Soyinka, and Nadine Gordimer. Genre titles include Mystery and Suspense Writers, Science Fiction Writers, Writers for Young Adults, and more. For example, Mystery And Suspense Writers is a 2-volume set on mystery, detective, and espionage fiction and covers in 84 articles some of the most influential and popular writers of the genre, including Elmore Leonard, Sue Grafton, and Patricia Cornwell.