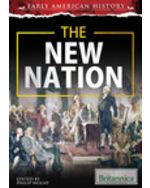 The roots of the newly formed United States of America are examined in detail in this volume. With evocative illustrations, paintings, maps, political documents, and other media largely drawn from the post-revolutionary era itself, this book details both the new nation's growing pains and shortcomings, its major accomplishments and optimism, its sociocultural trends, and its rapid growth and expansion. Political and military struggles, Manifest Destiny, and other dynamic events are all included in a narrative stretching from the nation's birth through the years prior to the U.S. Civil War.