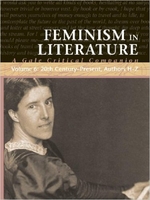 This six-volume set, the latest offering from the Gale Critical Companion Collection, explores the history of women and feminism throughout literature, from classical antiquity to modern times. Topics covered in Feminism in Literature include misogyny and women's social roles in ancient civilizations, 16th-century women's devotional literature, 17th- and 18th-century women's captivity narratives, the women's suffrage movement in 19th-century America, women writers of the "Lost Generation," lesbian literature, modern feminist theory, criticism and scholarship and much more.

"Each volume has cumulative title, subject, and author indexes. The set offers a wealth of information not previously collected. Summing Up: Highly Recommened." --Choice, June 2005