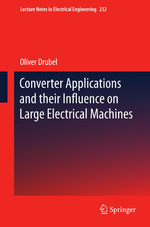 Converter driven applications are applied in more and more processes. Almost any installed wind-farm, ship drives, steel mills, several boiler feed water pumps, extruder and many other applications operate much more efficient and economic in case of variable speed solutions. The boundary conditions for a motor or generator will change, if it is supplied by a converter. An electrical machine, which is operated by a converter, can no longer be regarded as an independent component, but is embedded in a system consisting of converter and machine.This book gives an overview of existing converter designs for large electrical machines. Methods for the appropriate calculation of machine phenomena, which are implied by converters are derived in the power range above 500kVA. It is shown how due to the converter inherent higher voltage harmonics and pulse frequencies special phenomena are caused inside the machine which can be the reason for malfunction. It is demonstrated that additional losses create additional temperature increases or voltage peaks. The book describes how torque ripple can occur, which endanger the mechanical shaft system and last but not least shaft voltages are induced, which are sometimes sufficient in amplitude to damage bearings or to disturb sensors of the protection arrangements.