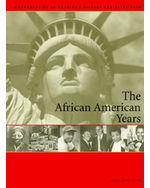 It is widely recognized that American history consists not of a single, unitary narrative, but of many narratives shaped by race, gender, and ethnic origins. The African American Years is a companion to Charles Scribner's Sons chronology of U.S. history The American Years, second edition. Whereas that reference work examined U.S. history in its entirety, The African American Years focuses specifically on the history of African Americans from pre-colonial times to the present. This timeline is enriched by overview essays, sidebars, and primary sources - poems, memoirs, legal documents - and more than two hundred images that chronicle the story of African Americans and create a portrait encompassing its struggles, triumphs, complexity, and exuberance.

Features include a comprehensive index; sidebars spotlighting specific people and topics; approximately 250 images; and a bibliography.

"This hefty volume covers significant events in African American history beginning with the Colonial period and continuing through the close for the twentieth century. A sixty-five page chronology catalogs key events...The single greatest strength of this volume lies in the extensive incorporation of primary source documents, including memoirs, letters, family histories, newspapers, oral histories, city directories, and other items that provide historical evidence to help students understand and interpret past events. These documents are fleshed out with essays and sidebars that provide the context in which the primary source materials are set...This especially valuable reference title is recommended for both high school and public libraries because of its wealth of detailed information, inclusion of primary source materials, and comprehensive scope." -- VOYA (June 2003)

"Another authoritative entry for the study of African Americans in the United States, this single volume provides a chronology, primary sources and essays spanning from the early settlement of this country through the Clinton years. An acknowledgment of President George W. Bush is given with a picture with Bush, Colin Powell and Condoleezza Rice. The 65-page chronology begins in 1444, with Portuguese advances in shipbuilding that allowed ships to carry greater cargos, and goes through 2002, featuring a picture of Denzel Washington receiving an Oscar. Sections of the book include The Colonial Period and the Revolutionary War, The Civil War, Reconstruction, The Long Journey Toward Integration, African Americans in the Modern Era and African Americans Coming to the Fore of American Identity. Bibliographies are included at the end of the essays. The two columns of small print will be somewhat off-putting to the less interested students, even though black-and-white photos and drawings are found throughout. Primary source documents are labeled as such in the text and a Primary Source Document Index at the back of the book helps students quickly find specific documents. Phillis Wheatley's poem to George Washington and his letter in response, Paul Laurence Dunbar's poem, We Wear the Mask and an analysis of Ralph Ellison's Invisible Man are indicative of the wealth of information contained in this volume. This certainly offers well-researched information. Recommended." -- Blanche Woolls and David Loertscher�s online Reference for Students (April 2003)

"Stepto recognizes that African American history covers a great enough span of time to need this chronological treatment. The need of today's students for such a framework is often disregarded; many lack working knowledge of a subject's order. The history of Africans in the new world predates the traditional date of 1619 given for the arrival of slaves in Jamestown, so students must contend with a 500-year period. Since the work illustrates that African Americans have affected all aspects of American culture, no period goes ignored. At first blush, section titles may seem inadequate, but they follow standard divisions of American history--"The Colonial Period and The Revolutionary War" and "The Civil War." The various main entries include primary source documents accompanied by sidebars that provide an overview of the primary document and supply its historical context. Summing Up: Highly recommended. All libraries." -- Choice (July/August 2003)

"Gr 10 Up — This companion to Ernie Gross's The American Years opens with a detailed chronology tracing the history of African American¿s from 1444 to 2002. Cross-references in the chronology lead to more detailed chapters that cover the Colonial period through the Civil War and Reconstruction to the modern era. This work employs wide-ranging sources such as essays, journal entries, poems, and sidebars along with numerous black-and-white reproductions and photographs and bibliographies. ... This resource will be useful for those researching black heritage and who are interested in lesser-known primary sources." -- School Library Journal (June 2003)

"Whereas The American Years provides detailed year-by-year coverage, the chronological portion of The African American Years takes up just 65 pages. It extends from 1444 to 2002, with entries for events grouped by year and ranging from a sentence to a paragraph in length. The entries are heavily cross-referenced to what is actually the major part of the volume, six lengthy sections that cover the periods from �The Colonial Period and the Revolutionary War� to the Civil Rights era and beyond. These sections provide general overviews; discussions of more particular topics, such as �African Americans on the Frontier� and �The African American Literary Experience�; bibliographies; and fairly extensive selections of primary documents. ... To describe this volume as a chronology is somewhat misleading, for it offers much more than a strictly �what happened when� perspective. ... The African American Years is recommended for high-school, public, and academic libraries as a useful guide to black history." -- Booklist (February 2003)

"This provides a panoramic view of the African American experience from the European slave trade through 2002. A detailed chronology is followed by historical sections and African Americans Coming to the Fore of American Identity. Each section in turn divides into chapters on specific subjects (e.g., religion), with a concluding general index and a primary source document index. More than 250 black-and-white illustrations and numerous cross-references supplement the text. The highlight here is the predominance of primary documents, some lengthy, which support the chapter essays. Some documents are commonplace (e.g., the Fourteenth Amendment), yet many are obscure but interesting. ... This resource is recommended for public library and undergraduate history collections." -- ARBA (2003)

"The first part is a timeline covering the sweep of African American history, pinpointing key years and recording significant events within them. The second contains essays, excerpts of primary documents, and sidebars to provide context as a background for understanding the significance of events and relating them to the larger story of African American history." -- Reference and Research Book News (May 2002)