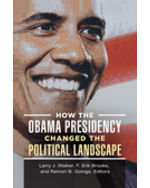 How the Obama Presidency Changed the Political Landscape, 1st Edition

Covering key issues ranging from education to political mobilization to racial stratification, this book provides a comprehensive examination of the Obama Presidency.

Front Cover.
Half Title Page.
Title Page.
Copyright Page.
Contents.
Preface.
Race, Party Affiliation, and the New Majority.
1: The Body Politic: How Underrepresented Groups Can Gain Political Power.
2: The Right to Vote, 50 Years Later: Do We Still Need the 1965 VRA?.
3: The Latino Vote: Growth, Influence, and How Obama Changed the Game.
4: African Americans, Voting, and the Republican Party.
5: Barack Obama and the Youth Vote.
6: New Definitions of Progressivism in the Age of Obama.
7: You Can’t Call That Mentoring: The Fallacy of Mentoring in Obama’s My Brother’s Keeper.
8: The Great Divider: Obama’s Influence on Trust in Government and Racial Attitudes.
Coalition Building, Social Media, and Political Messaging.
9: Body Cameras and Policing: From Ferguson to Baltimore.
10: President Obama: Code-Meshing and the Power of Speech in Racial Politics.
11: The Duplicitous Commodification of the Obama Presidency: Interrogating Barack Obama’s Sociopolitical Assent and Relevance through a Conscious Hip-Hop Pedagogy.
12: Black Women as Agents of Social Change during the Obama Presidency.
13: The Black President and the Black Body: The Intersection of Race, Class, Gender, and Violence in America.
14: HBCUs and Activism in the Post-Obama Era.
15: Standardized Testing, Teacher Accountability, and the School Choice Debate.
16: Use of Deadly Force: Policing and Accountability during the Obama Administration.
Index.
About the Editors and Contributors.