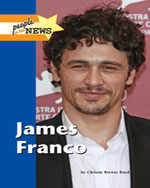 This biography profiles that life and work of actor James Franco. Franco got his acting start on the cult, television show Freeks and Geeks and became a Hollywood A-lister when he was cast opposite Tobey McGuire as Spidey's best friend in Spiderman. Yet Franco found himself in the unusual position of not enjoying his status as an A-list actor. Looking around for something more brought him back to college, where he found deep satisfaction and inspiration. In addition to being an actor and a student, he has sought to become a director, an independent filmmaker, a writer, a photographer, and a conceptual artist.