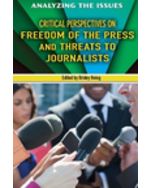 Analyzing the Issues: Critical Perspectives on Freedom of the Press and Threats to Journalists, 1st Edition

In political dictatorships or other forms of authoritarian governance, freedoms of the press are often curtailed first before any other liberties are revoked. This is because the press is integral to democracy and to keeping citizens informed of important political happenings so that they can become more informed voters. In some countries, such as Russia, journalists face extreme pressure to toe the party line; if they speak out against the government they are threatened and can even be killed. While most journalists do not fear for their lives in the United States, the press has faced increasing scrutiny from the White House. In this text, various experts weigh in on this important issue so readers can become more informed about the importance of, and the abuses toward, a free media.<\P>

Front Cover.
Half Title Page.
Title Page.
Copyright Page.
Contents.
Introduction.
1: What the Experts Say.
2: What the Government and Politicians Say.
3: What the Courts Say.
4: What Advocacy Organizations Say.
5: What the Media Say.
6: What Ordinary People Say.
Conclusion.
Bibliography.
Chapter Notes.
Glossary.
For More Information.
Index.
About the Editor.