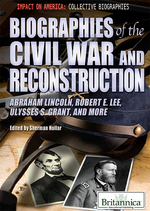 The formation and growth of any country involves a complex symphony of political, social, and cultural movements orchestrated by impassioned individuals. Some seek the betterment of their society while others are intent on making a more personal mark. Between the discovery and settlement of the land, the Reconstruction era, and beyond, the United States saw many such actors, including those who fought for the right to govern themselves during the American Revolution and those who fought for states rights and the emancipation of an entire race in the American Civil War. These captivating volumes survey the lives of the political figures and social revolutionaries that shaped early U.S. history.