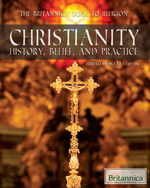 Arguably one the greatest influences on the Western world, if not the world as a whole, the Christian faith can be described as a cultural and religious colossus for the tremendous effect it has had on the development of civilization as we know it. Although centered around the figure of Jesus of Nazareth, Christianity evolved rapidly, leading to the creation of various sects and traditions that have come to represent different peoples around the world. This compelling tome examines the philosophy, history, dogma, and socio-cultural aspects of a religion that has been found at the heart of both conflict and peace. Sidebars brim with interesting facts and stories that support the main narrative.

Front Cover.
Half Title Page.
Title Page.
Copyright Page.
Contents.
Introduction.
1: The Essence and Identity of Christianity.
2: Early Views.
3: Logos.
4: Medieval and Reformation Views.
5: Modern Views.
6: The Question of Christian Identity.
7: Christian History.
8: The Early Church.
9: The Relation of the Early Church to Late Judaism.
10: The Relation of the Early Church to the Career and Intentions of Jesus.
11: Synoptic Gospels.
12: The Gentile Mission and St. Paul.
13: The Contemporary Social, Religious, and Intellectual World.
14: The Internal Development of the Early Christian Church.
15: The Problem of Jurisdictional Authority.
16: The Problem of Scriptural Authority.
17: The Problem of Theological Authority.
18: Early Heretical Movements.
19: Relations between Christianity and Greco-Roman Culture.
20: Church-State Relations.
21: Christianity and Classical Culture.
22: The Apologists.
23: The Early Liturgy, the Calendar, and the Arts.
24: The Alliance between Church and Empire.
25: Theological Controversies of the 4th and 5th Centuries.
26: Western Controversies.
27: Eastern Controversies.
28: The Arian Controversy.
29: Council of Chalcedon.
30: Liturgy and the Arts After Constantine.
31: New Forms of Worship.
32: Political Relations between East and West.
33: Literature and Art of the “Dark Ages”.
34: Missions and Monasticism.
35: The Photian Schism.
36: The Great East-West Schism.
37: From the Schism to the Present.
38: Papacy and Empire.
39: Medieval Thought.
40: Reformation.
41: Christianity from the 16th to the 20th Century.
42: Contemporary Christianity.
43: Christian Doctrine.
44: The Nature and Functions of Doctrine.
45: Scripture and Tradition.
46: Evangelism.
47: Catechesis.
48: Liturgy.
49: Ethics.
50: Defending the Faith.
51: Respecting Language and Knowledge.
52: Homoousios.
53: Respecting Places and Peoples.
54: Dogma, or Authoritative Teaching.
55: Consensus.
56: Creeds and Confessions.
57: Nicene Creed.
58: The Maturation of Understanding.
59: God.
60: Characteristic Features of the Christian Concept of God.
61: God the Father.
62: The Belief in the Oneness of the Father and the Son.
63: The Revelatory Character of God.
64: God as Creator, Sustainer, and Judge.
65: The View That God Is Not Solitary.
66: Contemporary Views of God.
67: Satan and the Origin of Evil.
68: Manichaeism.
69: God the Son.
70: Different Interpretations of the Person of Jesus.
71: The Christological Controversies.
72: Messianic Views.
73: The Doctrine of the Virgin Mary and Holy Wisdom.
74: God the Holy Spirit.
75: Contradictory Aspects of the Holy Spirit.
76: Conflict between Order and Charismatic Freedom.
77: The Operations of the Holy Spirit.
78: The Holy Trinity.
79: The Basis for the Doctrine of the Trinity.
80: Introduction of Neoplatonic Themes.
81: Attempts at a Definition.
82: The Christian Conception of Human Nature.
83: The Human as a Creature.
84: The Human as the Image of God.
85: Human Redemption.
86: The Problem of Suffering.
87: The Resurrection of the Body.
88: Progressive Human Perfection.
89: The Human Being in the Light of Christ.
90: The “Reborn” Human.
91: Human Liberation.
92: Joy in Human Existence.
93: The Charismatic Believer.
94: Christian Perfection.
95: Fellow Humans as the Present Christ.
96: Eschatology (“Last Things”).
97: Eschatology.
98: Expectations of the Kingdom of God in Early Christianity.
99: Expectations of the Kingdom of God in the Medieval and Reformation Periods.
100: Expectations of the Kingdom of God in the Post-Reformation Period.
101: The Role of Imminent Expectation in Missions and Emigrations.
102: Eschatological Expectations and Secularization.
103: Concepts of Life After Death.
104: The Church.
105: Normative Defenses in the Early Church.
106: Canon Law.
107: Evolution of the Episcopal Office.
108: Authority and Dissent.
109: Organization.
110: Church Polity.
111: Liturgy.
112: New Liturgical Forms and Antiliturgical Attitudes.
113: Church Tradition.
114: The Sacraments.
115: Veneration of Places, Objects, and People.
116: Monasticism.
117: Saint Pachomius.
118: The Saintly Life.
119: Art and Iconography.
120: Theology of Icons.
121: Christian Philosophy.
122: Influence of Greek Philosophy.
123: Influence of Neoplatonism on Christianity.
124: Emergence of Official Doctrine.
125: Aristotle and Aquinas.
126: Other Influences.
127: Faith and Reason.
128: Christian Philosophy as Natural Theology.
129: Arguments for the Existence of God.
130: The Immortality of the Soul.
131: Christian Mysticism.
132: History of Christian Mysticism.
133: Early Church.
134: Eastern Christianity.
135: Pseudo-Dionysis the Areopagite.
136: Western Catholic Christianity.
137: Protestant Christianity.
138: Stages of Christian Mysticism.
139: The Dying to Self.
140: The Union with God.
141: The Readjustment.
142: Forms of Christian Mysticism.
143: Christ-Mysticism.
144: Trinitarian Mysticism.
145: Negative Mysticism: God and the Godhead.
146: Significance of Christian Mysticism.
147: Christianity's Relationship with the World.
148: Church and State.
149: The Church and the Roman Empire.
150: The Church and the Byzantine Empire.
151: The Church and Western States.
152: Separation of Church and State.
153: Church and State in Eastern and Western Theology.
154: Church and Society.
155: The Problem of Slavery and Persecution.
156: Free Church.
157: Theological and Humanitarian Motivations.
158: Church and Education.
159: Intellectualism versus Anti-Intellectualism.
160: Forms of Christian Education.
161: Church and Social Welfare.
162: Healing the Sick.
163: Care for the Sick.
164: Care for Widows and Orphans.
165: Property, Poverty, and the Poor.
166: Church and Family.
167: Church and Marriage.
168: The Tendency Toward Asceticism.
169: Church and Individual.
170: Love as the Basis for Christian Ethics.
171: Freedom and Responsibility.
172: Catholic Churches.
173: Roman Catholicism.
174: Beliefs and Practices.
175: Second Vatican Council.
176: Major Dogmas and Doctrines.
177: Tradition and Scripture.
178: Sacraments.
179: Order of the Mass.
180: Eastern Rite Churches.
181: Old Catholic Churches.
182: Origins.
183: Organization.
184: Theological Position.
185: Ecumenical Relationships.
186: Eastern Churches.
187: Eastern Orthodoxy.
188: Doctrine.
189: Worship and Sacraments.
190: Oriental Orthodoxy.
191: Armenian Apostolic Church.
192: Coptic Orthodox Church of Alexandria.
193: Syriac Orthodox Patriarchate of Antioch and All the East.
194: Ethiopian Orthodox Tewahedo Church.