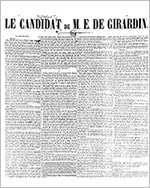 Newspapers of the French Revolution of 1848

Part of the Archives Unbound platform, Newspapers Of The French Revolution Of 1848 (Journaux De La Révolution De 1848) captures the British Library's holdings of all newspaper and periodical titles published in France during the Revolution of 1848. Coverage is continued through the coup d'état in 1851 to the establishment of the Second Empire in 1852. Some titles represent continuations of national dailies and weeklies which published through the unrest, offering a base-note of news coverage from experienced journalists, while many others sprang up in direct response to the political situation, and witnessed events from very partisan perspectives. George Sand is just one of the famous literary voices here commenting on the unrest and uncertainty.

While the revolutions are second only to World War II as research areas in French History, specific titles also address those studying many aspects of 19th-century French life, including: women's periodicals; literary, musical, theatre and opera reviews; medical and trade titles; regional papers; and newsletters.

The Revolution of 1848 caused the final collapse of monarchy in France, and in the power vacuum that followed a range of competing voices sought to control the future direction of the country. The social and political upheavals of this period are richly detailed in this unique collection of newspapers and periodicals -- an essential resource for understanding modern European history.