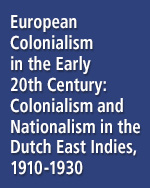 The Dutch East Indies experienced the replacement of company rule by Dutch government rule and the complete transformation of Java into a colonial society and the successful extension of colonial rule to Sumatra and the eastern archipelago during the early 20th century. The boundaries of the modern state of Indonesia were defined during this time and the process of generally exploitative political, military, and economic integration began. This collection comprises correspondence, studies and reports, cables, maps, and other kinds of documents related to U.S. consular activities. U.S. Consulates were listening posts reporting on the activities of the Dutch colonial government and the activities of the native peoples.