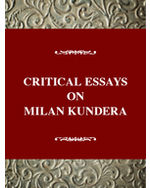 Essays study the Czech author of The Unbearable Lightness of Being, whose works usually focus on the bleakness of life under Communism.