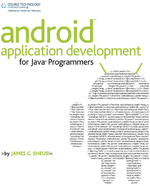 We are witnessing an explosion in the use of handheld mobile devices worldwide. Recent polls have shown that many people own and use more than one mobile device, and some use as many as three or four. Smart phones, tablets, and handheld game devices are ubiquitous. The Android operating system (OS)--an open-source OS with Linux at its core--is an ever-more-popular OS on these devices. ANDROID APPLICATION DEVELOPMENT FOR JAVA PROGRAMMERS provides an ideal, quick-start tutorial for anyone interested in developing Android mobile device applications, from the student or hobbyist familiar with Java, to the experienced programmer wanting to enter the mobile device application market. Because the Android development software provides an emulator program, the reader doesn't need to own an Android mobile device to take advantage of this book. Although the code presented in the book can be used to produce complete running applications, the goal is to inspire the reader to bring his own mobile application ideas to reality in a short time. The book is organized in a logical, evolutionary manner starting with configuration of the development environment and ending with two comprehensive projects. The beginning chapters cover basic application components and configuration of the Android emulator and basic user interface design, whereas later chapters cover how to accomplish more involved areas such as use of GPS, graphics, networking, and databases.