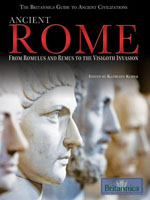 The Britannica Guide to Ancient Civilizations: Ancient Rome: From Romulus and Remus to the Visigoth Invasion, 1st Edition

Echoes of ancient Roman concepts of governance, law, and society still ring throughout the world today. A stranger to neither war nor wealth, ancient Rome was shaped as much by strife as it was by prosperity. The expansion of the Roman Empire was buoyed by this culture's tendency to embrace traditions of its newly assimilated peoples, making Rome a cradle of endless and enduring possibilities. The history of an exceptional empire is recounted in this sweeping volume.