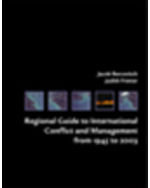 Regional Guide to International Conflict and Management from 1945 to 2003, 1st Edition

Regional Guide to International Conflict Management from 1945 to 2003 provides global, regional, and specific information on the over 350 international conflicts that have occurred since World War II.

At the heart of the book are comprehensive regional sections, each of which includes:

Introductory chapters examine global patterns and trends in international conflict and how conflict is managed, including ethnic conflict and the expanded role of the United Nations. Tables, figures, maps, and a comprehensive index round out this valuable resource.