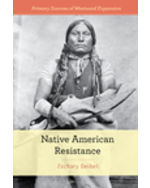 The United States grew rapidly from the time of the Louisiana Purchase to the building of the Transcontinental Railroad. All of this expansion came at the expense of Native American populations that had either lived in the region for centuries or been forced there from ancestral homes in the East. Tribes memorably fought on their own and together in a doomed effort to retain the land and a lifestyle that had long sustained their families. This book outlines some of the major conflicts of the Westward Expansion, and of the treaties that were signed, and often broken, by representatives of the tribes and the government of the United States.