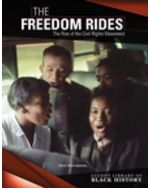 By the middle of the 1900s, African Americans were tired of the discriminatory treatment they had been receiving even after the abolition of slavery nearly 100 years prior. As the American civil rights movement began to grow, a group of courageous activists, called the Freedom Riders, began challenging the segregated status quo. Assisted by engaging fact boxes and a comprehensive text, readers are placed in the middle of the fight for equality. Striking photographs show readers the human aspect of the push, and fight, for greater social equality.

Front Cover.
Title Page.
Copyright Page.
Contents.
Foreword.
Setting the Scene: A Timeline.
Introduction: Risking Life for the Right to Be Equal.
1: A Racist Society.
2: The First Steps Toward a Full-Blown Movement.
3: A Bumpy Road to Equality.
4: The Journey Begins Again.
5: Locked Up.
6: Laying a Foundation for the Future.
Notes.
For More Information.
Index.
Picture Credits.
About the Author.