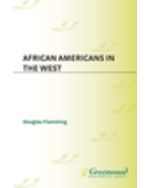 African Americans in the West covers the rise of the slave trade to its expansion into what was at the time the westernmost United States; from the post-Civil War migrations, including the Exodusters who fled the South for Kansas in 1879 to the mid-20th century civil rights movement, which saw many critical events take place in the West -- from the organization of the Black Panthers in Oakland to the tragic Watts riots in Los Angeles.