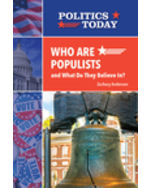 Politics Today: Who Are Populists and What Do They Believe In?, 1st Edition

Inspired by the explosion of populist movements both within the United States and around the world, Cambridge Dictionary named "populism" its 2017 Word of the Year. What exactly is populism when there is no Populist Party and no political figures who identify as populist? This essential volume explains this unique perspective that has seen a worldwide resurgence in recent years. From examining the theoretical populist argument to tracing the development of populist thought from the Midwest of the late 1800s to post-Great Recession America and beyond, this book presents an engaging, accessible, and timely primer on an influential political ideology.