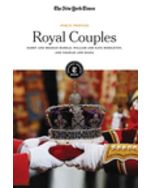 Few political families have captured the public's fascination quite like the members of the House of Windsor, the British royal family. This collection of articles compiles The New York Times's coverage of three of the best-known couples in modern history: Harry and Meghan, William and Kate, and Charles and Diana. Through these pieces, readers can witness firsthand the most publicized moments of each couple's story, including engagements, weddings, childbirth, and, in the case of Charles and Diana, a quite public divorce. Furthermore, articles on Diana's untimely, tragic death and Meghan Markle's activism and career as an actor make this an essential guide to the royal family's affairs.

Front Cover.
Half Title Page.
Title Page.
Copyright Page.
Contents.
Introduction.
Prince Charles and Diana Spencer.
1: Royal Romance and Princely Duty.
2: Charles and Lady Diana Rehearse the Wedding.
3: An Ocean of Union Jacks and Chanting Throngs Along Procession Route.
4: Whispers, Anger and Doubt As Britons Rally to Princess.
5: Charles and Diana Are Separating ‘Amicably’.
6: Charles and Diana Agree on Divorce Terms.
7: It's Official: Charles and Diana Split, and She Pays Her Own Bills.
8: For Media and the Royals, Earl Takes Off His Gloves.
9: For Charles, Camilla and Britain, the Wait Is Over.
10: Britons Strike Sour Notes on Royal Wedding.
11: Charles and Camilla, Married at Last, and With Hardly a Hitch.
12: Diana's Legacy: A Reshaped Monarchy, A More Emotional U.K..
Prince William and Kate Middleton.
13: Diana's Ring Seals Prince William's Marriage Plans.
14: British Royal Wedding Set for April 29.
15: Fixating on a Future Royal as Elusive as Cinderella.
16: In This Fairy Tale, Not One, but Two Queens in Waiting.
17: Royals Show Little Affinity for Rank as They Take Spouses.
18: A Traditional Royal Wedding, but for the 3 Billion Witnesses.
19: Passion Versus Pageantry in Royal Wedding Reports.
20: British Monarchy Scraps Rule of Male Succession in New Step to Modernization.
21: A Royal Christening in Britain Amid a Refrain of Coos.
22: Kate, Duchess of Cambridge, Gives Birth to Baby Girl.
23: Prince William and Kate Try to Seem Normal.
Prince Harry and Meghan Markle.
24: For Prince Harry, Vegas Exploits Didn't Stay There.
25: Who Wants to Be King? No One, Prince Harry Says.
26: Prince Harry, Almost Just Like Us.
27: Prince Harry, in His Mother's Footsteps.
28: Prince Harry Denounces Media Coverage of His Girlfriend, Meghan Markle.
29: Prince Harry, Meghan Markle and News of a Royal Wedding.
30: The Prince and the Actress.
31: Prince Harry Used Princess Diana's Diamonds in Engagement Ring.
32: Prince Harry Casts Aside Ghosts of Royal Marriages Past.
33: Meghan Markle's Sheer Top Was a Sneaky Statement for a Royal Portrait.
34: Meghan Markle Is Going to Make History.
35: Can Meghan Markle Save the Monarchy?.
36: Prince Harry and Meghan Markle Invite Members of Public to Wedding Day.
37: A Mixed-Race Royal Couple? It Wouldn't Be the First.
38: So, Meghan Markle, Are You Familiar With the Statute of Rhuddlan?.
39: Royal Engagement Seen as Symbol of Change, With Asterisks.
40: British Royal Weddings and the Barriers That Fell With Them.
41: As Prince Harry and Meghan Markle Wed, a New Era Dawns.
Much Ado About Royals.
42: For an English Town, Wedding Madness and History.
43: Americans and Royalty: Symbols Clash No More.
44: Gearing Up for Distant Royal ‘I Dos’.
45: Toasts for Royals, Spiked With Scorn.
46: In Media's Wedding Frenzy, Hints of Viewer Fatigue.
47: Books, Brioche and Baby Clothes: The Royal Merchandise.
48: Celebrity Weeklies Are Reveling in a Royal Baby, and Sales.
49: Major Royal News. Impose Story of Your Choice..
50: Do Americans Love the British Royal Family? Quite.
51: Prince Harry Is Getting Married. Time for Themed Mugs and Nightclub Tours..
52: Meghan Markle Introduces the British Monarchy to the African-American Experience.
Glossary.
Media Literacy Terms.
Media Literacy Questions.
Citations.
Index.