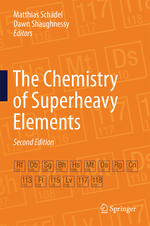 The second edition of 'The Chemistry of the Superheavy Elements' provides a complete coverage of the chemistry of a series of elements beginning with atomic number 104 – the transactinides or superheavy elements – including their nuclear properties and production in nuclear reactions at heavy-ion accelerators. The contributors to this work include many renowned scientists who, during the last decades, have made vast contributions towards understanding the physics and chemistry of these elusive elements, both experimentally and theoretically. The main emphasis here is on demonstrating the fascinating studies involved in probing the architecture of the Periodic Table at its uppermost end, where relativistic effects drastically influence chemical properties. All known chemical properties of these elements are described together with the experimental techniques applied to study these short-lived man-made elements one atom-at-a-time. The status of theoretical chemistry and of empirical models is presented as well as aspects of nuclear physics. In addition, one chapter outlines the meanderings in this field from a historical perspective and the search for superheavy elements in Nature.