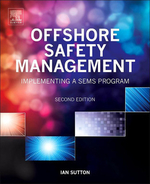 Offshore Safety Management, Second Edition provides an experienced engineer's perspective on the new Safety and Environmental System (SEMS) regulations for offshore oil and gas drilling, how they compare to prior regulations, and how to implement the new standards seamlessly and efficiently. The second edition is greatly expanded, with increased coverage of technical areas such as engineering standards and drilling, and procedural areas such as safety cases and formal safety assessments. The new material both complements the SEMS coverage and increases the book's relevance to a global audience. Following the explosion, fire, and sinking of the Deepwater Horizon floating drilling rig in April 2010, the Bureau of Ocean Energy Management, Regulations, and Enforcement (BOEMRE) issued many new regulations. One of them was the Safety and Environmental System rule, which is based on the American Petroleum Institute's SEMP recommended practice, finalized in April 2013. Author Ian Sutton explains the SEMS rule, and describes what must be done to achieve compliance. Each of the twelve elements of the SEMS rule (such as Management of Change and Safe Work Practices) is described in the book, and guidance is provided on how to meet BOEMRE requirements.