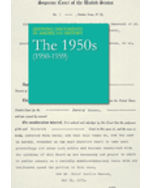 This new addition to the Defining Documents series profiles the first decade of the 20th century in America through careful, close analysis of historic documents from the era. Over forty primary source documents are studied, delivering a thorough examination of this crucial period in American history.