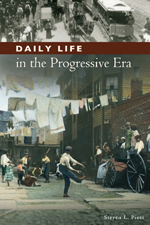 Tremendous change occurred during the first two decades of the 20th century. By 1910, about 26 million Americans attended movies weekly—a form of popular entertainment that didn't even exist five years earlier. Cars were a rare novelty at the beginning of the century, but by 1916 nearly a half million Model Ts had been sold. In the years surrounding World War I, women finally won the right to vote, and more than a half million blacks migrated from the South to the North.