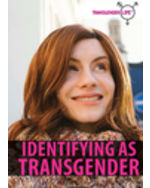 This great guide is a much-needed way to introduce young readers to the gender galaxy. Readers will become familiar with some of the many gender identities a person can have, such as trans man, trans woman, gender fluid, bigender, or two-spirit. They’ll learn about bodies beyond the gender binary, as well as the differences between gender expression, gender identity, and sexuality. A chapter on transphobia and cissexism acknowledges the discrimination and mistreatment that trans people face, but the support that trans communities can provide is also emphasized. Perfect for both transgender teens and young trans allies.

Front Cover.
Title Page.
Copyright Page.
Contents.
Introduction.
1: The Gender Galaxy: Life Beyond the Binary.
2: Bodies Beyond the Binary.
3: Who We are and Whom We Date: Transness, Orientation, and Relationships.
4: Gender Hurts: Transphobia, Cissexism, and Trans Resistance.
5: Finding Life in the Gender Galaxy: Trans Friendship and Community.
Glossary.
For More Information.
For Further Reading.
Bibliography.
Index.
About the Author.
Photo Credits.